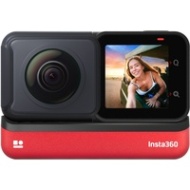 It might not come cheap but the Insta360 One RS 1-inch 360 Edition is well worth a look if you want to invest in high-end 360 filming.

Arriving with high-end features such as 6K capture and near-flawless stabilisation, not to mention the ease with which you can edit all your 360 footage in the accompanying app, the Insta360 One RS 1-inch 360 Edition is a marvel. It’s held back by an...

Insta360 returns to the modular action camera concept with its latest device, but this time there's several key improvements under the hood.

The screen is just too small ; FlowState stabilisation can’t compete with GoPro

In the One RS, Insta360 has finally shown why its modular concept is worth sticking with. The upgraded kit allows for better looking video and stills, plus the fact that it’s all backwards compatible with the One R is a huge boon for consumers. While...

Insta360 ONE RS review: The one you’ve been waiting for

The Insta360 One RS is a powerful, modular camera system offering both traditional action camera functionality and 360 capability.

“The Insta360 ONE RS is the best you can buy to gain entry into the 360-degree camera space and the fact that it's modular means it will last for years to come.”

A fun, powerful 360 camera that also comes with compromises

INSTA360 HAS RELEASED its first hardware update for its modular action camera, the Insta360 One RS. The One RS builds on what the One R (8/10, WIRED Recommends) promised: namely, to combine the action and 360-degree video camera into a single,...

Slightly bulkier than a GoPro.

Personally, since I export video at 4K anyway (sometimes 1080p), the video quality trade-off is negligible. If you want 360 video, get this camera. It's the best of both worlds. Assuming you want both worlds, of course.

The Insta360 One RS is a modular action camera and the follow-up to the Insta360 One R from early 2020. This new model looks a lot like the old one, but just about everything has changed at least a little. The One RS has a new battery base, plus a...

The One RS brings Insta360's modular action camera up to date with improved image quality and a superior workflow to its predecessor. It's a slight shame about the small screen, but otherwise the One RS' price makes it a fine alternative to its GoPro...

The Insta360 One RS ($549.99 as reviewed) is the company's second-generation modular action camera, a follow-up to the One R from 2020. The RS keeps the same external design, but features more internal processing power and works with better camera...

The Insta360 One RS has a modular design that unlocks more creative possibilities than most action cams.

Co-engineered with Leica, this camera aims to bring premium image quality to the small 360 camera market

The best consumer 360 cam for image quality; just don’t mistake it for an action cam

Great image quality and stabilisation ; Easy to use ; Backwards-compatible with One R and RS Cores

The adaptable modular action cam gets a respectable update. For impressively stable stills and video, the Insta360 One RS delivers

Thanks to some meaningful improvements, the One RS remains an adaptable alternative to the GoPro Hero 10